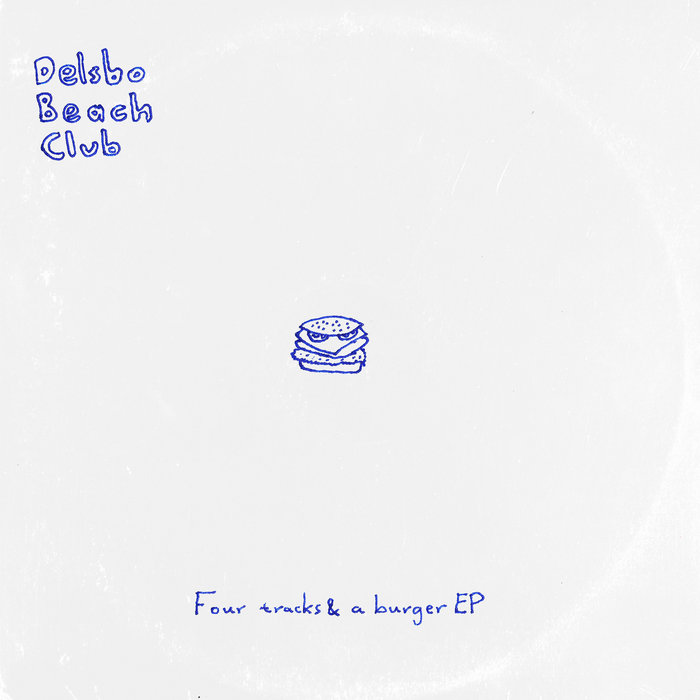 In 2017, Stockholm based Delsbo Beach Club established themselves as one of the most promising names on the Swedish indie scene. Debut single All The Way Home was released in October that year and saw the band quickly earn a spot as the second most blogged act worldwide on Hype Machine as well as receiving praise from national newspapers to CLASH Magazine. The follow-ups Talking In My Head and Something’s Over also received international attention from NBHAP among others and various Swedish magazines. After some line-up changes, the four piece is finally set to follow-up the last single with debut EP Four tracks & a burger, out January 25th via Rama Lama Records.

Including all three singles, "Four tracks & a burger shows" a wide range of what Delsbo Beach Club can be. From "All The Way Home” with the sound that has been described as a golden combination of Mac DeMarco and Beach House to “Something’s Over” with its “emotionally heavy crescendo of well sounding chaos” . Erik Björklund's howling vocals is yet again a vital part of Delsbo Beach Club's fuzzy indie pop, finding it's irresistible strength in the guitar-driven melody.

The band tells the story behind the EP:

‘Four tracks & a burger’ is our first EP, recorded at four locations across Stockholm. Guitars are provided by Erik Björklund and Max Englund, bass from Aron Lange, drums from Alexander Kuronen and synths and vocals by Erik. The EP is mixed by Alexander Eldefords and mastered by Magnus Lindberg. The cover is drawn by Erik.

This EP consists of what we then saw as our four best songs when playing live at venues in and outside of Stockholm. The songs are mostly about love and the misunderstandings connected to it. The instrumental parts are strongly influenced by all kinds of indie band, mostly ones of the 2010s where the guitar is in focus. Some influences worth mentioning are Mac DeMarco, The Growlers, Allah-las, Dead Ghosts, Harlem among others.

The reasoning behind making this EP was quite simple. We wanted something that reflected us as a band on a record while being enthusiastic about once again diving into the world of recording. A process you learn from every time and gradually get a few percent better at with each try.

It hasn’t been an easy journey recording this EP, despite its shortage in minutes. In the aftermath of this recording, Aron and Max chose to leave the band. That had us somewhat distracted from finishing the record and instead turned to the world(Stockholm), looking for new band members. This was both positive and negative as we didn’t find the time to finish the record but also had the honor to learn to know Stanislav Nailyk, Ebba Vikdahl and Jesper Jonasson, who all were a part of our second EP. An EP that was finished before this one even was released.

Erik Björklund:
“The final result of this EP is something that I’m very proud of. I’ve learned so much about what it actually takes to put together an EP or an album. But most of all I’m incredibly pleased with the songs. When hearing the final mixes and masters I really heard the full potential, something I might have been a bit blind aboud after dragging out on this process for almost a year. “

Delsbo Beach Club started out as a solo project by frontman Erik Björklund, with a long-time fascination of DIY and bedroom-pop Erik recorded the demos in his new room and set the ground for Delsbo Beach Club's charming sound. After a few line-up changes, the band, featuring members of Star Horse and Pinemen, now consist of Alexander Kuronen (drums), Jacki Skogh (guitar), and Stas Neylik (bass), but the EP was recorded with Max Englund (guitar) and Aron Lange (bass).

Four tracks & a burger is out on all platforms January 25th via Rama Lama Records (Steve Buscemi's Dreamy Eyes, Melby, Cat Princess, Chez Ali etc.) and a second EP is to be expected later in the spring alongside a vinyl including both releases.

Bandcamp Daily  your guide to the world of Bandcamp

Guest hosted by Tamar Osbourn aka Collocutor and Toshio Matsuura.